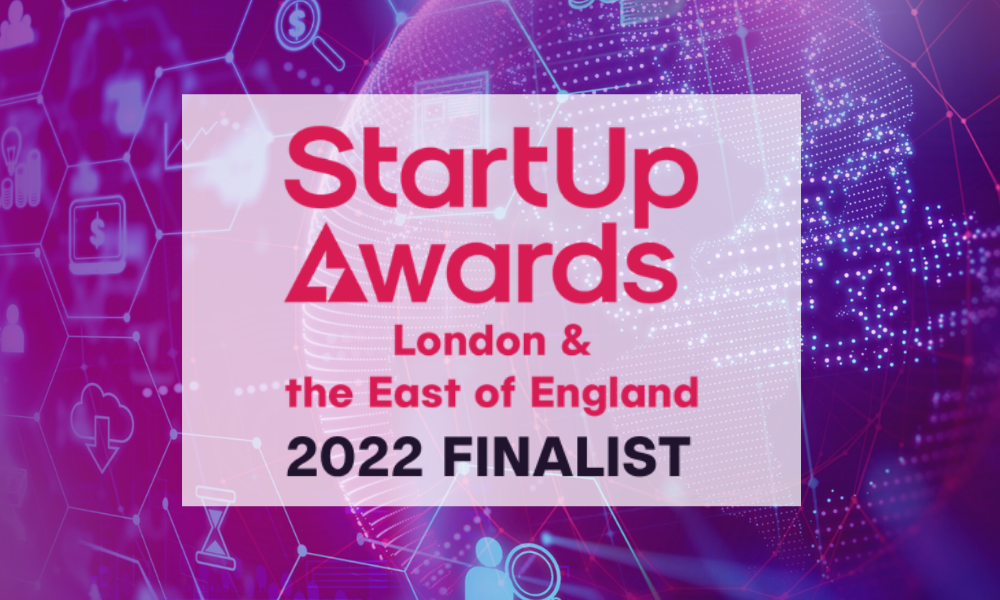 The StartUp Awards National Series has been launched to recognise the booming startup scene across the UK which has accelerated since the pandemic began. In 2020, when most of the world was shutting down, more than 400,000 startups were set up in Britain, with similar increases seen in other European countries.

There was stiff competition with over 2,500 applications received in response to the Startup Awards National Series’ first-ever call for entries.

We are very excited to be a finalist in such a competitive award category. Looking back to when we launched (only weeks before the Global Pandemic hit) and then the challenging weeks/months that followed, we never imagined that two year later we would be in the running for such an accreditation. This means a lot to us.

Supported nationally by BT, EY, Dell & Intel, the programme will celebrate the achievements of the amazing individuals across the UK who have turned an idea into an opportunity and taken the risk to launch a new product or service.

Co-founded by the team behind the Great British Entrepreneur Awards, the new series follows the success of the Wales StartUp Awards, after organisers recognised the exceptional potential in the startup scene across the other British regions.

Professor Dylan Jones-Evans OBE, the creator of the StartUp Awards National Series, said: “​​New firms are important for generating economic prosperity, employment opportunities and innovation. Since 2016, the Wales StartUp Awards have celebrated this amazing annual contribution to our economy by entrepreneurs and the impact they have on communities across the nation.

“Given the sheer volume of phenomenal startups we’ve heard from since then, as well as the huge post-pandemic shift in people’s desires to take their career in a new direction and set up a business against the odds, we felt it was the right time to take the programme nationwide. We’ve been blown away by the standard of entries in this first year and truly look forward to crowning the winners in June.”

Urban Digital are a talent acquisition consultancy, focused on the ever-evolving digital and technology landscape.

The StartUp Awards National Series is a collaboration between the founders of the Great British Entrepreneur Awards – an established programme nationally receiving over 5,000 applications annually – and the Wales Start-Up Awards, the only regional awards currently celebrating new businesses in the UK.

The StartUp Awards National Series will recognise the achievements of those amazing individuals who have had a great idea, spotted the opportunity and taken the risks to launch a new product or service.

Already established and thriving in Wales, the StartUp Awards National Series is now taking the passion and drive to celebrate new business and extending across the whole of the United Kingdom.

Published on April 27, 2021 by urban-digital-recruitment-shortlisted-for-startup-awards-national-series

Why we should carry on with first stage video interviews

How to switch off from work at Christmas

Like the sound of being FULLY REMOTE with zero tra

Rebecca is looking for an Enterprise Sales Special

Rebecca is looking for a Chief Client Officer to j

Laura is looking for an Agency Director to join a